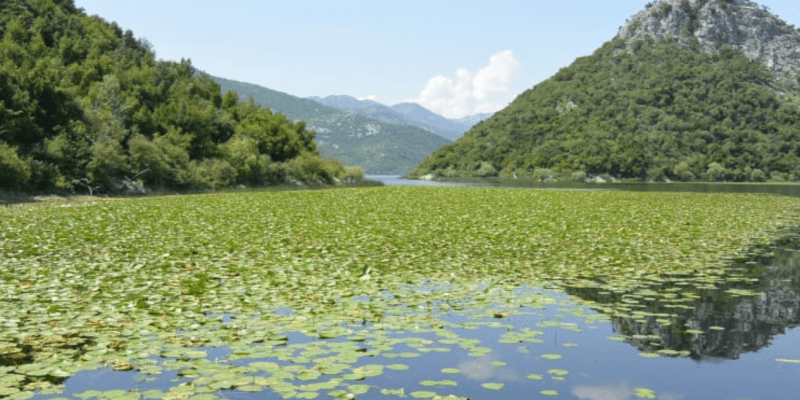 Lake Skadar: Why Southern Europe's Largest Lake Is Worth A Visit

For a place that many people have barely heard of, this beautiful body of water has enough names.

Depending where you come from, it could be Shkodra, Shkodër or Scutari, but to most visitors it's known as Lake Skadar.

The destination straddles the border of Montenegro and Albania and is the largest lake in Southern Europe, a pristine wilderness and national park.

It's not exactly top of must-visit lists for global travelers, but those that do make the effort are rewarded with a unique environment and a very special travel experience.

The lake is untouched by development or commercialization -- at least for now. Although there are concerns that Porto Skadar Lake Project, a new "eco-resort" on the lake, could threaten the ecosystem and rare species, including many that are endemic.

Others respond that the project will be environmentally sensitive and contribute much-needed jobs, infrastructure and economic growth.

While that debate continues, here are some of the reasons why the 200 square-mile haven and wetland of international importance makes for such a compelling destination.

On a visit to Skadar, you can't help but step down a gear -- for fans of slow travel, there are few better destinations.

The local lifestyle seems to reflect an inability to rush, while by far the best way to visit the majority of the lake is via boat trips, primarily from the sleepy Montenegrin town of Virpazar.

The handful of small wooden fishermen's boats come with a roof made of bamboo reeds and are individually named, so you may find yourself on Milica or the Golden Frog.

With the sound of silence and stunning natural beauty around you, all you need to do is sit back and gently drift along.

The lake is home to a remarkable diversity of wildlife. Fifty species of fish live in the waters, 18 of which are found nowhere else on earth, confirming its status as a wetland of international importance. There are eel and bass, sturgeon and most commonly, carp.

There are more than 50 species of freshwater snails, almost one third of which are endemic, making it one of the most important sites in Europe.

If you're very lucky you may catch a glimpse of an endangered otter, while water snakes slither alongside you in the water.

Beautiful bluebottles, along with red, orange and green dragonflies, are a constant companion.

A remarkable 270 species make Lake Skadar one of Europe's largest bird reserves and a popular destination for ornithologists.

That's because they can spot some of Europe's last Dalmatian pelicans, cormorants drying their wings and habitats of the rare yellow heron.

Around 90% of the population are migrating birds, meaning spoonbills, ducks and white egrets are other regular visitors.

At times on the boat you feel as if you're on a bird safari, with incredible diversity at every turn.

All that wildlife needs plant life to match and amongst the huge diversity sit more than 25 species named as rare and endangered, including a varietal of water chestnut, the Dalmatian crocus and numerous protected orchids.

Bamboo is frequently visible on the lake's shore, while some of the most photogenic flowers have to be the white and yellow water lilies popping out of the marshes.

It may not be as pretty, but there are hundreds of types of algae, many of which again are rare or unique. Forests also cover much of the surrounding landscape, including white willow and oak.

Despite the tranquility and largely untouched nature of the lake, it has played witness to an often-turbulent history.

Around the lake sit remains of 18 monasteries, fortresses, monuments and churches. Inhabited variously by ancient Illyrians, Greeks and Romans, Skarda was once part of the Byzantine empire and was invaded and occupied by the Ottoman Empire for five centuries, as shown by ruins including the fortress of Besac in Virpazar.

Following the empire's collapse in the 19th century, Montenegro then became an independent principality before Virpazar made history as the site of Montenegro's first Partisan uprising of World War II.

The rule of the Ottoman Empire also gave rise to one of the lake's most infamous legends. The fortress of Grmozur was built in 1843 on a stony island, before subsequently being converted to the Montenegro version of Alcatraz under King Nicola I.

It was said that neither prisoners -- nor prison guards -- who were able to swim could be sent there, theoretically making escape impossible.

Two prisoners did apparently make their escape, using a door as a raft. For the unfortunate guards watching them, their punishment was to serve the same sentence as the escaped prisoners.

While the lake is a protected wildlife haven, fishing with a permit is allowed in some areas, meaning fish doesn't get much fresher when it comes to your table.

The same goes for other produce, including brilliant homemade cheeses, herbs such as rosemary and sage and mounds of fruit and nuts such as the ubiquitous pomegranates, figs, cherries and walnuts.

A small number of humble dining options are dotted across the lake. In one, overlooking ruins of ancient houses and beds of reeds, the food is simple but delicious.

An elderly couple oversee things, with plastic garden chairs and picnic tables providing the perfect backdrop to a feast.

It might start with home-cured ham called prsut, brilliant local tomatoes in a salad, before carp is fried in bubbling oil and served with homemade bread.

Shots of a fiery homebrew liquor called rakija ensure that the gentle boat ride back may well be a sleepy one.

A number of historic monasteries are scattered on and around the lake, not surprisingly given the silence, peace and natural beauty that surround them.

Vranjina Monastery, more commonly known as St. Nicholas, is a Serbian Orthodox monastery and also one of the country's oldest, dating back to the 13th century. It sits high on a hill on an island of the same name, commanding incredible views.

Although it has been attacked and almost destroyed over the course of its history, the church was restored about 20 years ago, while efforts continue on renovating other ruins on the site. Today just one monk lives there, looking after the church and also working as a beekeeper, producing honey seemingly with medicinal benefits.