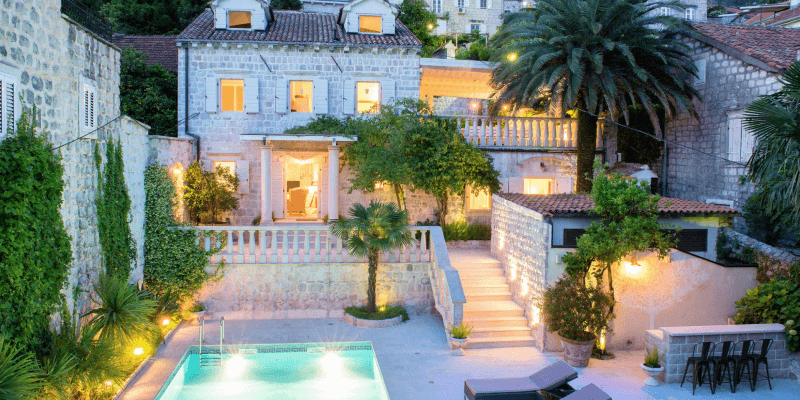 This 350-year-old stone house with four bedrooms, three bathrooms and a swimming pool on the Bay of Kotor was renovated in 2013 to add modern conveniences. The 2,938-square-foot house, on about a tenth of an acre in the town of Perast, has three levels.

The house is known for having the largest gardens in Perast, said Leila Calic of Resido Montenegro, who has the listing. Its flowers have been used to decorate an annual procession of boats out to Our Lady of the Rocks, a man-made island in the bay.

The home’s outdoor pool, about 36 by 16 feet, is heated. The pool area has a brick bar with a sink and a refrigerator.

The first floor of the house has a living room with terra-cotta tiles, heavy wooden ceiling beams and a white fireplace. Adjacent to the living room is a self-contained apartment, with terra-cotta tiles, a sitting area, a canopy bed, a small kitchen and a bathroom. On the wall is a peach hand-painted image of a tree with winding branches in which the leaves are illuminated with lights.

The second floor of the house, which has an ample terrace, can be reached by an external stairway as well as an internal one. The kitchen has whitewashed stucco walls and ornate floor tiles. Built-in shelves house provisions, and there is a double oven.

The kitchen opens to a pergola-covered dining area that overlooks the pool. Also outdoors are a barbecue and a pizza oven, as well as a shaded outdoor sitting area. The garden includes palm, fig, orange, lemon and laurel trees, bougainvillea, white jasmine and hydrangeas.

The house is air-conditioned, and furniture is included in the asking price.

The master bedroom is on the second floor, with an adjacent bathroom with a blend of rustic and modern features, such as a stone washstand in the window, as well as a rain shower head. The top floor of the home has two dormered bedrooms with bold striped wallpaper and picturesque views of Kotor Bay.

Perast is a tiny town of around 350 people, and parking can be difficult. There is no parking space with this home, but owners receive a car pass during the summer months, when Perast is car-free. They can park at one of the two car parks at either end of town.

The Bay of Kotor is often described as the Mediterranean’s only fjord — perhaps a stretch, though not a far one. Perast, long ruled by the Venetian Republic, has stunning palaces and Baroque architecture. Kayaking, boating, mountain biking and cycling are popular pursuits. The drive to Tivat Airport is about 25 minutes.

The housing market in Montenegro was affected by the global real estate crisis of 2008, with a loss of foreign buyers, though Russians did continue to buy homes, said Ivana Vukicevic, the head of the property portfolio at Montenegro Prospects. While housing prices plummeted by as much as 20 to 30 percent in mid-2009, the cost of land was rising, as Russians sought property on which to build homes.

“Once the British buyers left the Montenegrin real estate market at the start of the crisis, they were replaced by Russian buyers of second homes, who constituted around 87 percent of all second buyers in Montenegro between 2009 and 2014,” said Dolores Ilic, director of research and marketing at Dream Estates Montenegro, which is affiliated with Savills.

“This is fairly representative of the whole market along the coast, where average prices have recovered to a more realistic — not inflated — level,” she said. Prices are based on factors such as obtainable rental income, quality of construction and location, brokers said. Seafront properties continue to retain their value in most cases, and overdeveloped areas have seen the smallest increase in property value.

“For the last few years, we’ve seen a steady interest in properties, without the excitement of a bubble, and good value apartments and houses are selling well,” Ms. Vukicevic said.

WHO BUYS IN MONTENEGRO

In general, buyers coming from Britain and the European Union prefer the Bay of Kotor and the Lustica Peninsula, while buyers from Russia prefer the Budva Riviera, Ms. Ilic said.

Last year, the federal government passed a law allowing foreign buyers to obtain a residency permit upon purchase of a property, regardless of its value, Ms. Vukicevic said. Also, with the recent introduction of notaries, who handle all real property transactions, buyers have better protection, she said.

There are no restrictions on foreign buyers in Montenegro, which is a big part of its appeal. While it’s not necessary to hire a foreign lawyer in Montenegro, most real estate agents advise one. Legal fees typically run about 1,000 euros, Ms. Vukicevic said.

The real estate agent’s commission is paid by the seller; the buyer bears the costs of notarizing the contract and paying the title transfer tax, which is 3 percent of the value of the property.

“Altogether, we recommend the buyers budget approximately 4 percent of the value of the property for purchase costs,” Ms. Vukicevic said. Typically, nonresidents pay in cash or obtain loans from their home countries’ banks, as interest rates are too high to be competitive in Montenegro.