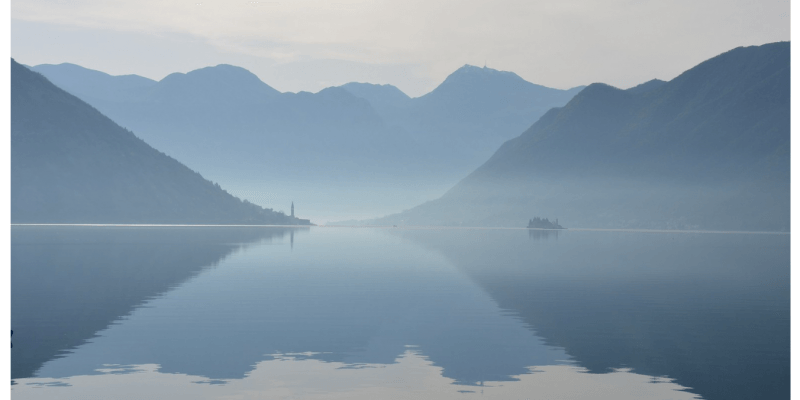 With its rugged mountain views and glistening seaside ports, it’s surprising that the charm and allure of Montenegro has been reserved for locals or those visiting from other Balkan states. Thanks to new cruise ship routes, high-end hotel openings, and a flood of interest from off-the-beaten-path travel enthusiasts, Montenegro is quickly becoming the place to go on the Adriatic. From sweeping views to a fresh focus on food—and ample outdoor activities to keep your heart pumping—this often-overlooked country might be the most surprising place you visit in 2017.

Although Croatia boasts more beaches and sprawling Adriatic coastline, Montenegro’s claim to fame lies in its unspoiled terrain. The water—which is more opal than cerulean—sparkles in the afternoon sun and the bevy of pristine sandy beaches offer spellbinding views of the country’s iconic limestone cliffs. Be sure to visit Budva, the country’s hottest tourist spot—with a vaguely Miami vibe, it boasts a slew of buzzy (and fascinating) bars, a gorgeous old town, and miles of beaches. Not all of the beaches in this Venetian-inspired city are bustling, though; hidden down an unassuming narrow path, Mogren offers views without the crowds. Far quirkier is Ulcinj’s 7.5 miles of picture-perfect shore, featuring one of the country’s top nudist beaches and some of the best people-watching. A little more exclusive—and once the holiday playground of Marilyn Monroe—is Sveti Stefan, another stretch of coastline worth exploring. The medieval residential village turned luxury islet has a public beach that sits right outside of the city’s walls that offers beachgoers an unparalleled view of the 15th-century buildings. With their outstanding red roofs, they cut a striking contrast to the astonishing blue water and the island’s unique and craggily rocky coast.

The fare might seem recognizably Mediterranean as you hop from restaurant to restaurant in Kotor, Budva, or Sveti Stefan, but there’s far more depth to the local cuisine than meets the eye. Thanks to the country’s strong Balkan heritage, the dishes are just as influenced by neighboring Albania and Macedonia as they are by Croatia or Greece. The fresh-caught octopus is grilled and drizzled with olive oil and served alongside sarma (cabbage leaves stuffed with mincemeat) or slices of salted sheep’s cheese arranged around platters of succulent vegetables. The flakey burek, which is inspired by the Turks, is stuffed to the brim with an assortment of cheeses, spinach, or meat and is best noshed for breakfast as you’re strolling the streets of Kotor or Budva. For a hearty bite that’s 100 percent traditional, head to Pod Valet, a carnivorous restaurant in the city of Podgorica, which offers hearty slabs of lamb kebobs, meat stews, and ćevapčići, a typical grilled southeastern dish of mincemeat made with sausages. For a meal that’s a little less artery clogging, stop by Restaurant Conte on the Bonte Bay. Here you’ll find locally sourced seafood dishes like the Perast appetizer, which is a bountiful collection of mussels, octopus, anchovies, and squid, and poached local fish served with succulent prawns.

The country’s prime location on the Mediterranean means the seafood is bar none, which is precisely why famed restaurateur (and actor) Robert De Niro opened one of his world-renowned Nobu restaurants on the stunning Sveti Stefan island this past June. Although the yellowfin tuna and famous black cod are flown in, the other seafood is locally caught. Other high-end restaurants are joining Nobu’s lead, so don’t be surprised if you find more globally recognized eateries popping up in some of the country’s newest luxury hotels (like the much-anticipated Chedi, slated to open in early 2018).

Although a little more expensive than Macedonia and Albania, the prices in Montenegro are still a far cry from other Mediterranean hot spots, like Croatia and Greece. Even in the touristic areas of Kotor, meals rarely cost more than 30 euros. Same goes for lodging: A five-star hotel like Aman on Sveti Stefan are 10 percent less than similar properties in nearby Dubrovnik and you can rent an entire apartment with a balcony overlooking the Bay of Kotor for less than 30 euros a night—half the price you’d pay for the same view and same amenities in Croatia. Prices do go up in the summer tourist season, so for even more savings, visit in the shoulder seasons. But probably the best testament to the country’s prices are the tours. The Great Montenegro Tour, for example, takes you on a full-day excursion from Kotor up to Boka Bay, down to Njeguši for breakfast, through Lovćen National Park to the town of Cetinje for a walking tour, a boat ride, and lunch around the Crnojevića River, then another walking tour of Budva’s old town, a stop at Jaz Beach for swimming, and a nightcap of rakija in Kotor for a mere 35 euros.

More than just beaches and cities, Montenegro is actually one of the Balkan’s best bets for outdoor adventure. Durmitor National Park is a great place to start, with its protected pine forests, crystal glacial lakes, cascading waterfalls, deep gorges, and abundance of well-marked trails. Formed by glaciers and traversed rivers, the more than 50 limestone cliffs create a dramatic background in photos, with the staggering Bobotov Kuk soaring above the rest at more than 2,500 meters in height. In winter, the park is a beacon for skiers, while summer brings with it rafting, hiking, and climbing enthusiasts. Also inside the park is the famous Tara River Canyon, which is Europe’s deepest river (at more than 4,000 feet deep). The rushing river is most famously enjoyed on a raft, but the best panoramic views of the river flanked by the lush forests and limestone peaks come from the top of Mt. Ćurevac. For serious adrenaline junkies, the Tara River Bridge also touts an 865-meter-long zip line that soars above the rushing river rapids. Beyond the National Park, there’s plenty of activity to be found in Kotor. The city’s famous Fortifications, a UNESCO World Heritage Site, offers 360-degree views of the bay and the walled city. The Bay is also a hot spot for kayaking and canoeing, which also let you explore the complex collection of fjords that punctuate the coast.

One thing that always put Montenegro behind the pack of its glamorous neighbors was the lack of luxury lodging in and around the country’s most popular cities. However, with more visitors than ever crossing the border from Croatia to Montenegro, either by cruise ship or car, five-star properties are starting to populate the glistening bays. Luxury hotelier Aman, for example, was one of the first to open, and other high-end properties have followed suit. Notably the biggest opening for luxury yachters and millionaires was the Porto Montenegro, a stunning and expansive yacht marina that opened in 2010. Along with high-end residences, Porto Montenegro will also be home to a new Regent hotel later this year that will offer guests balcony views of the harbor. On the more affordable side of luxury is Starwood’s Four-Points Sheraton, which will open in the ski town of Kolašin in February. One of the most talked-about openings won’t happen this year, but the suspense of the new Chedi Hotel in Luštica Bay is enough to get people booking as soon as the site opens. The property will be the first five-star one to open in Boka Bay and will have two restaurants, a spa, a bar, a business center, and an incredible outdoor pool.

Although the locals will say there are already plenty of cruise passengers flooding the city of Kotor, 2017 is bringing even more ships and itineraries to the country of less than 1 million residents. Royal Caribbean, Norwegian Cruise Lines, and Celebrity are adding more stops to Kotor, while luxury brands like P&O, Cunard, Viking, and Azamara Club Cruises will also add stops along Montenegro’s glistening bay. Unlike Dubrovnik, which can welcome thousands of visitors at a time from multiple ships, the port authority of Kotor isn’t as developed, which still means a far less crowded and overwhelming port visit.